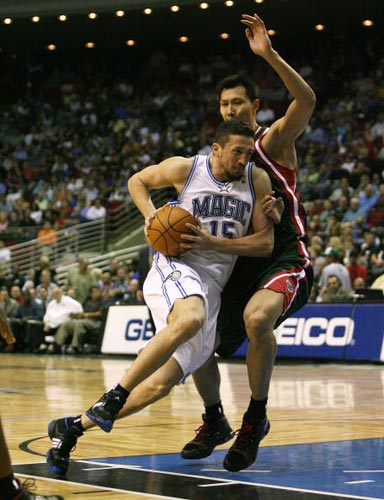 ORLANDO, Fla.(AP) Rashard Lewis scored 26 points and Hedo Turkoglu had 24 to lift the sharp-shooting Orlando Magic to a 102-83 victory over the Milwaukee Bucks in the teams' season opener Wednesday night.

Behind Turkoglu and Lewis, making his Eastern Conference debut, the Magic buried Milwaukee from behind the arc. Orlando was 12-of-22, compared with 4-of-17 for the Bucks. Lewis was 4-of-5 and Turkoglu 3-for-5.

The Magic actually shot better from 3-point range (54 percent) than from the field (44 percent).

Yi's first NBA statistic was a turnover, but he responded the next play by blocking Turkoglu's layup. The 7-footer scored his first NBA bucket about 30 seconds later on a 22-foot jumper.

Dwight Howard had 16 points and 12 rebounds. Perhaps most importantly for Orlando, he hit eight of 10 free throws.
Posted by confusion at 6:46 PM